In the fall of 2016, Apple released the iOS10 update, which introduced — among other necessary things like invisible ink — the Emoji replacement and emoji prediction functions. So that as you type along in your message window, emoji’s are automatically suggested to finish your sentence. Like this: 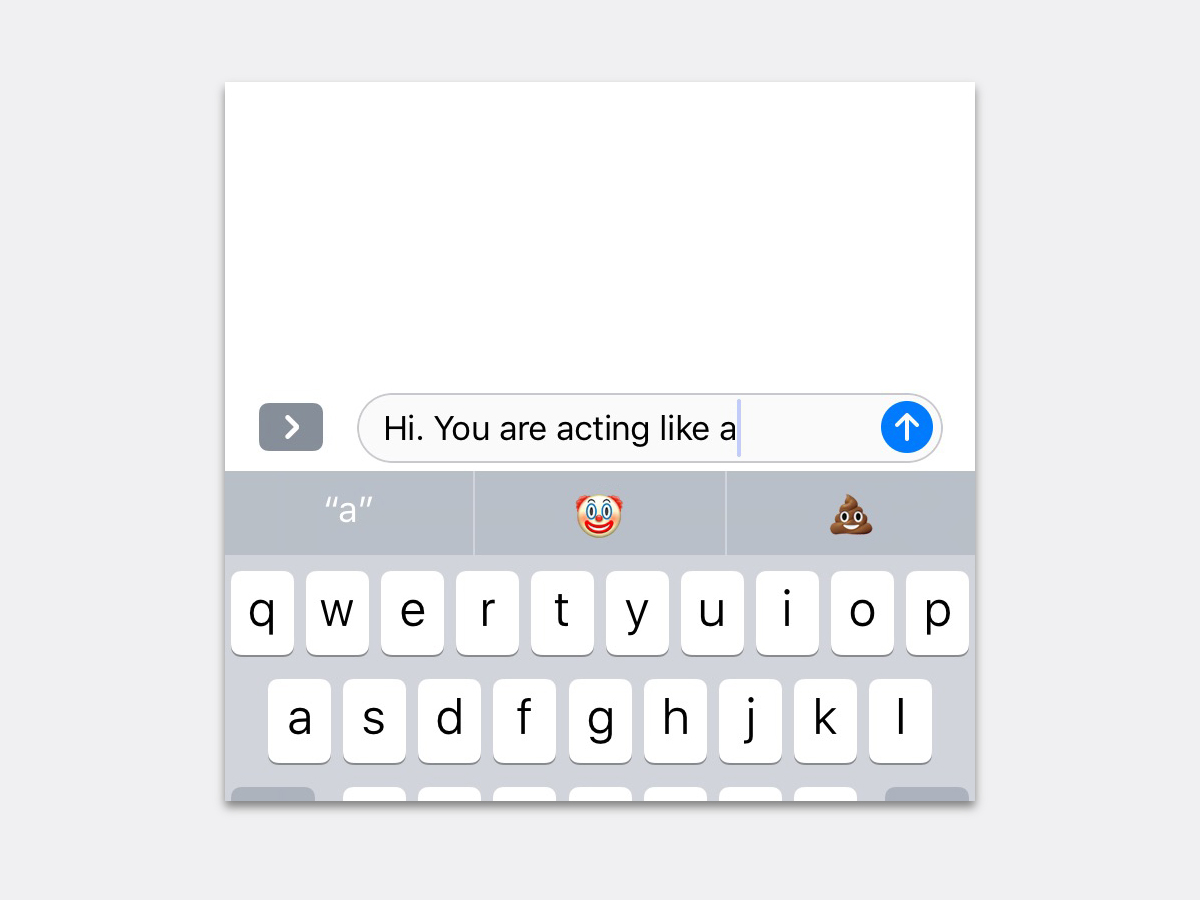 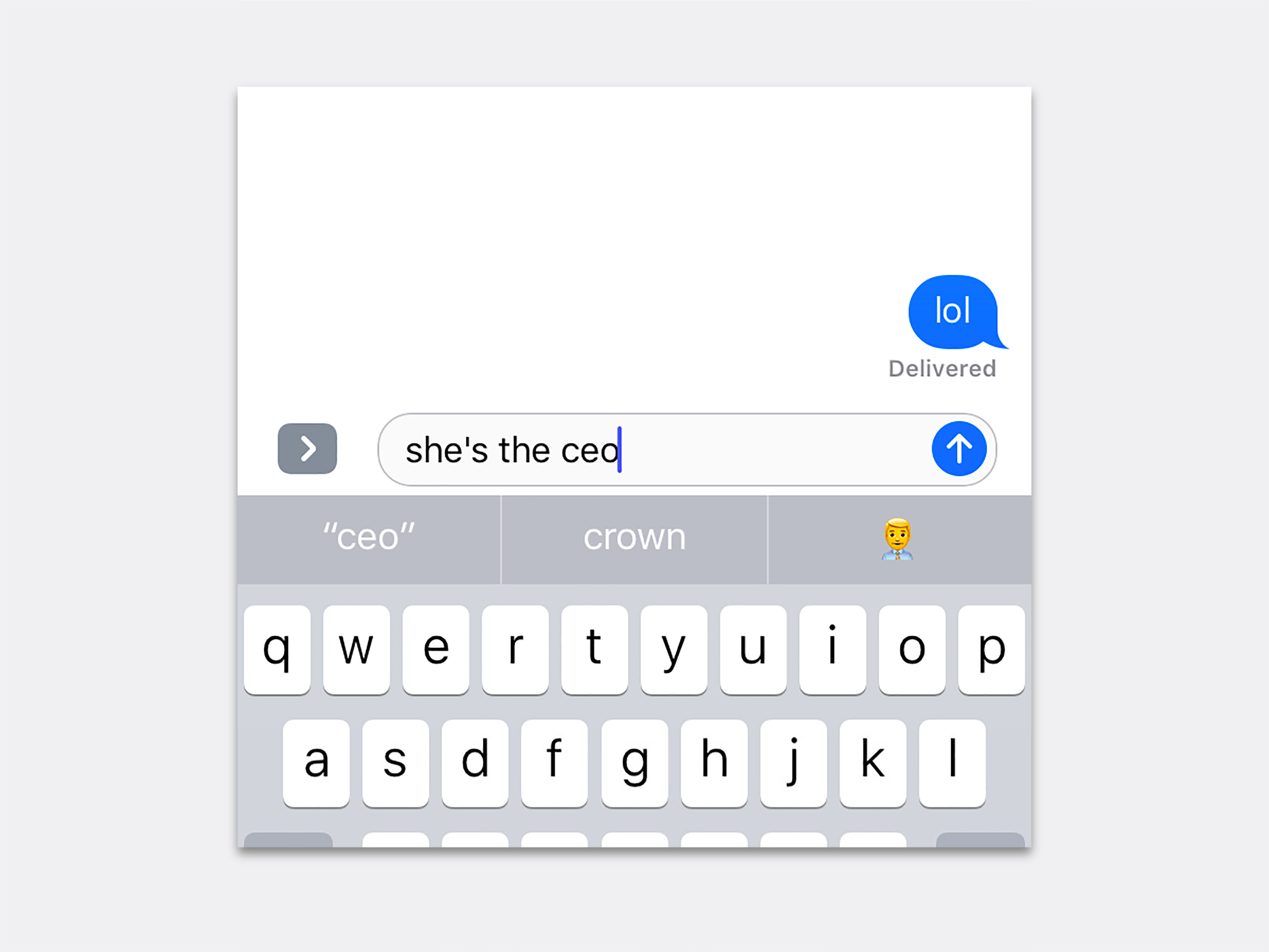 The website Mashable brought this bias to people’s attention in an article in March of 2017. They noted that even if the text clearly used a female pronoun such as, “she’s the CFO,” the suggested emoji would be a male icon. After reading the article in the fall of 2017 as I was researching this project, I tested the predictive function on my phone and found the same gender biased results. Then, a few weeks later after an upgrade, the problem was fixed and I was given this option when I texted Alicia, 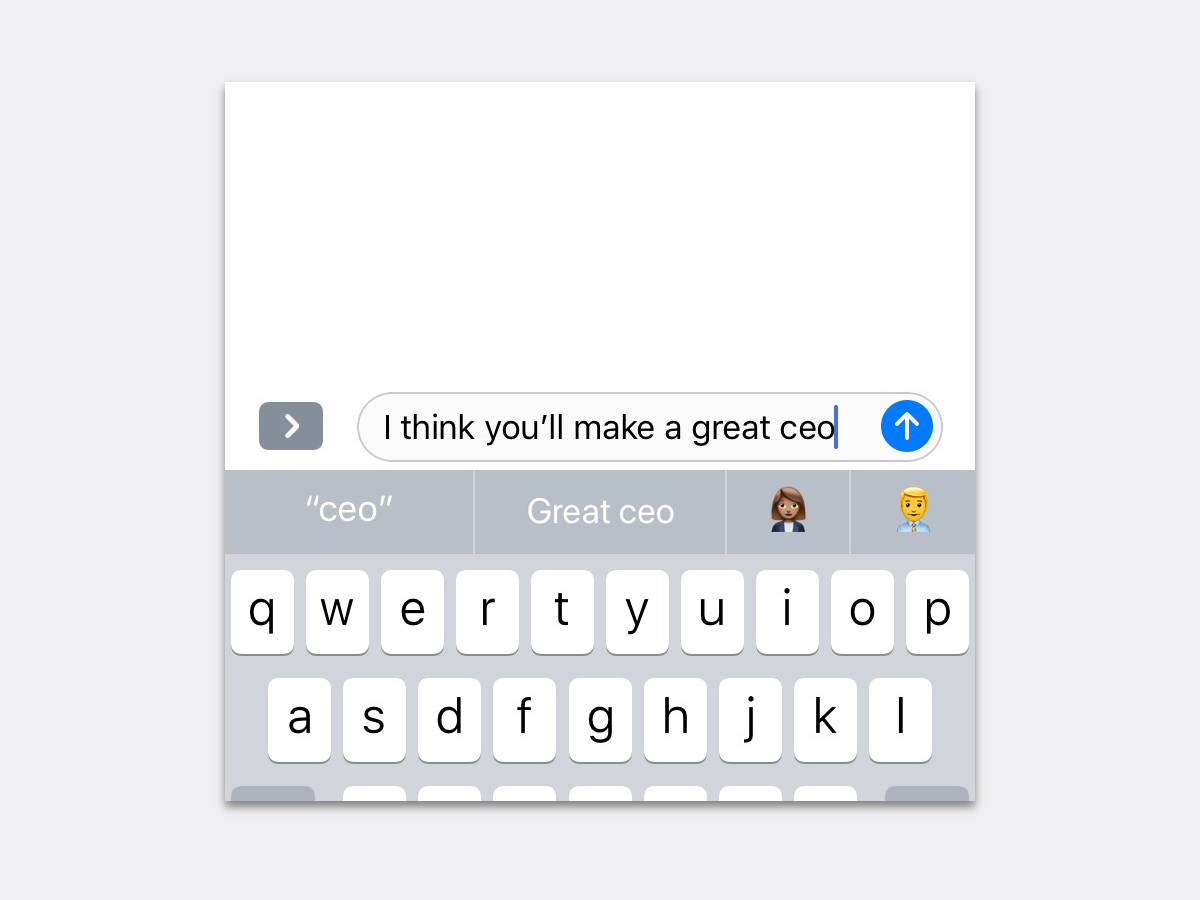 It still perpetuates a gender binary, but was at least a step in the right direction. It is indicative, however of gender biases in the highly male-dominated tech world. Much has been written about bias lately in regards to how it shows up in machine learning and AI. It struck me as relevant in light of our project — while tools for communication from the quill, to letterpress, typewriter and telephone, can be seen as typically gendered, the biases inherent in the production reflect the prevalent gender roles in society over time. What I find unsettling is that biases in communication today are almost more damaging than they were in the past because gender-biased decisions are happening in hidden algorithms, programming, and machine learning.

The reasons for the implicitly predictive male CEO image could have been due to patterns in the writers’ own messaging, or because the code number for a man’s face is lower than the number for the woman’s, or because the designer who originated the code simply thought of CEOs as naturally male, or thought that a male figure could represent a neutral figure much as how “he” has been used as a universal pronoun for decades. As users of this communication technology, we are left completely in the dark about the mechanisms dictating the design and need to be constantly vigilant to detect them.  As designers though, we have the power to consider how machine learning, pattern recognition, and predictive programing can be used to introduce positive change.

My project is a hypothetical hack that proposes to utilize the ability of technology to force change overnight and with that the potential of typography to precede spoken language in forming new words. As a place to start, I thought I’d focus on the idea of designing a gender neutral pronoun glyph.

As I muddled through the project, a few models came to light: 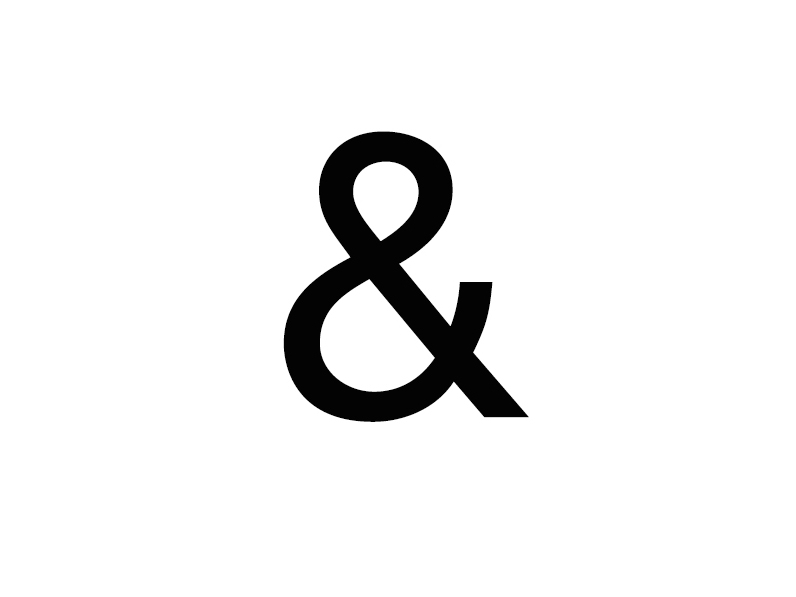 1. The Ampersand.
It’s form is derived from the latin “et” for “and” but its name actually came after the initial use of glyph itself. Probably first introduced by a harried Roman scribe, creating a ligature of e and t, it was further developed and established during the Renaissance, when the e/t ligature remained despite the transformation of “and” into different languages. It has 3 different forms – the Roman and the italic and lowercase where you can see its origins more clearly. 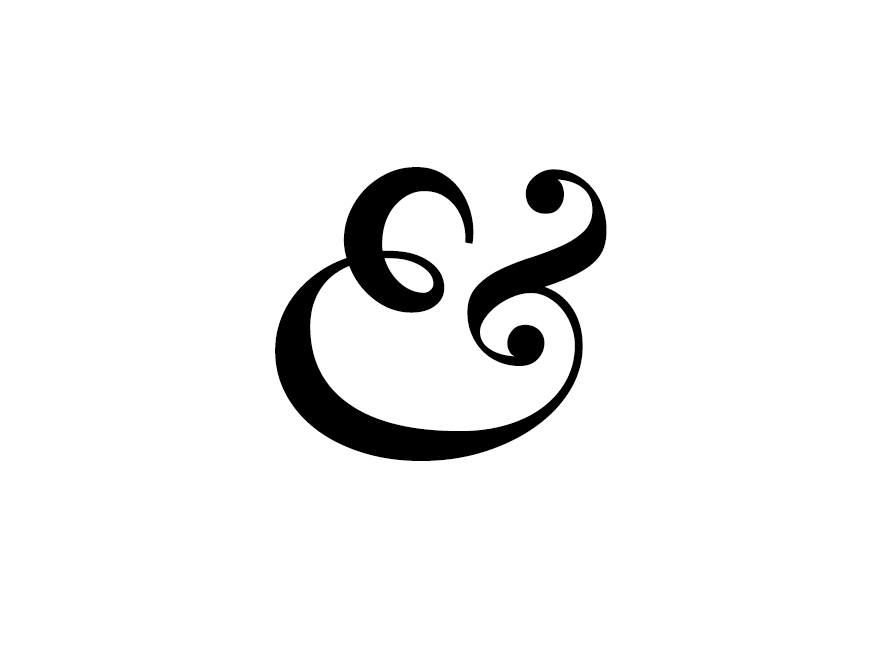 The glyph’s usage was so common that at one point that it was considered the 27th letter of the alphabet. British school children reciting the letters would end with ‘…X, Y, Z, and per se and.’ Since ‘per se’ means ‘by or of itself,’ what the students meant was ‘…X, Y, Z, and, by itself, and.’ Over time, the phrase ‘and per se and’ was mixed into a single word: ampersand. While the glyph lost out on inclusion in the alphabet, the form remains, with lots of variation as it is drawn into different fonts. 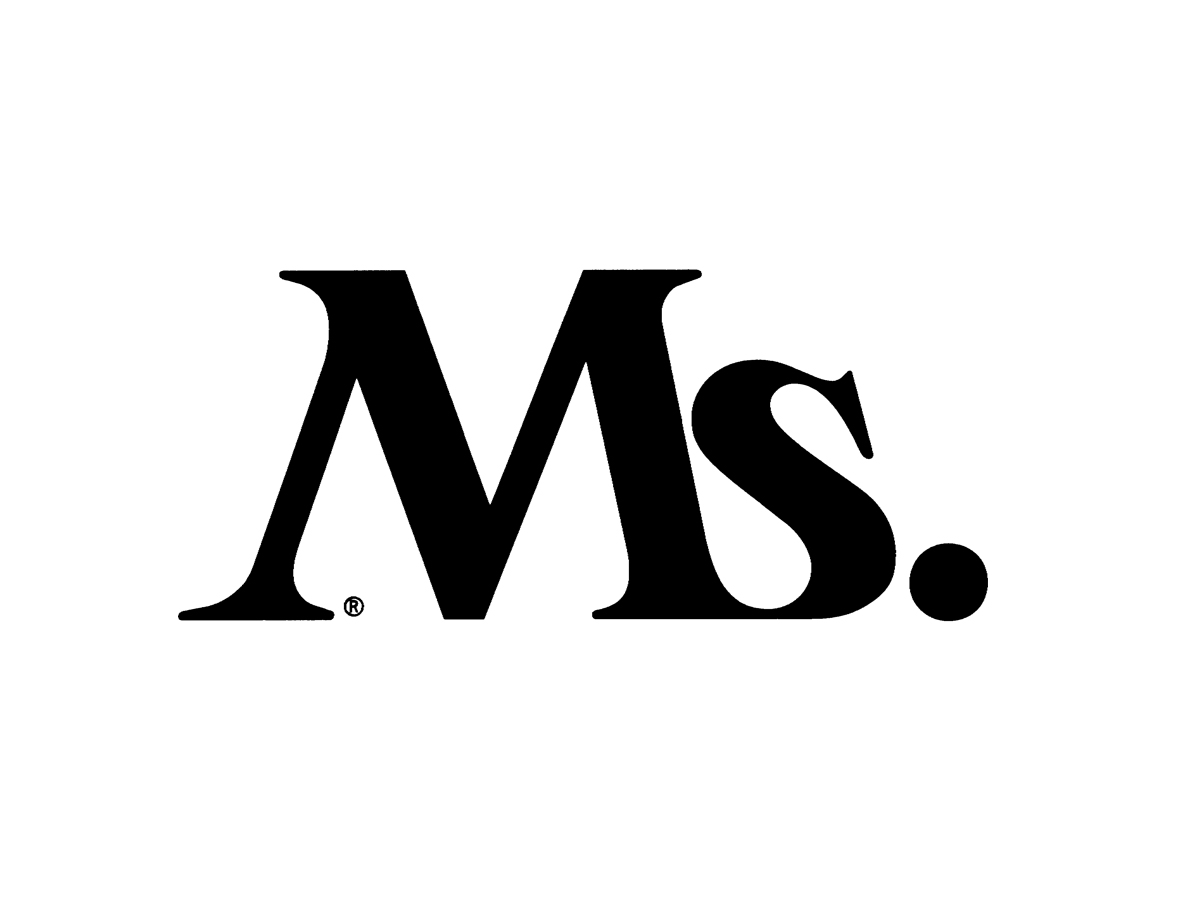 2. Ms
The history of the honorifics Miss, Mrs., and Ms. are rather muddled: in the past, Mrs. was used as a term of respect or to indicate social rank regardless of marital status, while Ms. served as an abbreviation for Mistress and for Miss. Over time, the terms Mrs. and Miss became more codified to designate marital status. In a 2009 essay from the NYTimes column ‘On Language,’ Ben Zimmer traced the history of using the term Ms. to refer to women whose marital status is unknown to a 1901 edition of The Sunday Republican of Springfield, Mass. Here, an unnamed writer stated

“There is a void in the English language which, with some diffidence, we undertake to fill. Every one has been put in an embarrassing position by ignorance of the status of some woman. To call a maiden Mrs. is only a shade worse than to insult a matron with the inferior title Miss. Yet it is not always easy to know the facts.”

He went on to suggest “A more comprehensive term which does homage to the sex without expressing any views as to their domestic situation, namely, Ms. With this simple and easy to write title, a tactfully ambiguous compromise between Miss and Mrs., the person concerned can translate it properly according to circumstances.

The writer even gave a pronunciation tip: “For oral use it might be rendered as ‘Mizz,’ which would be a close parallel to the practice long universal in many bucolic regions, where a slurred Mis’ does duty for Miss and Mrs. alike.”

The suggestion was largely ignored for decades, and Ms. existed as a little-used option in business etiquette books. In the 1960 and 70s however, the term was rediscovered and promoted as politicized option for feminists who rejected both Mrs. and Miss. As it gained power as a symbol of the feminist movement, it was chosen as the title of Gloria Steinem’s influential magazine. The pronunciation was still in question though, at the time the magazine was introduced in 1971, both the “miss” and “mizz” pronunciations were considered acceptable — with “mizz,” eventually winning out in common usage. 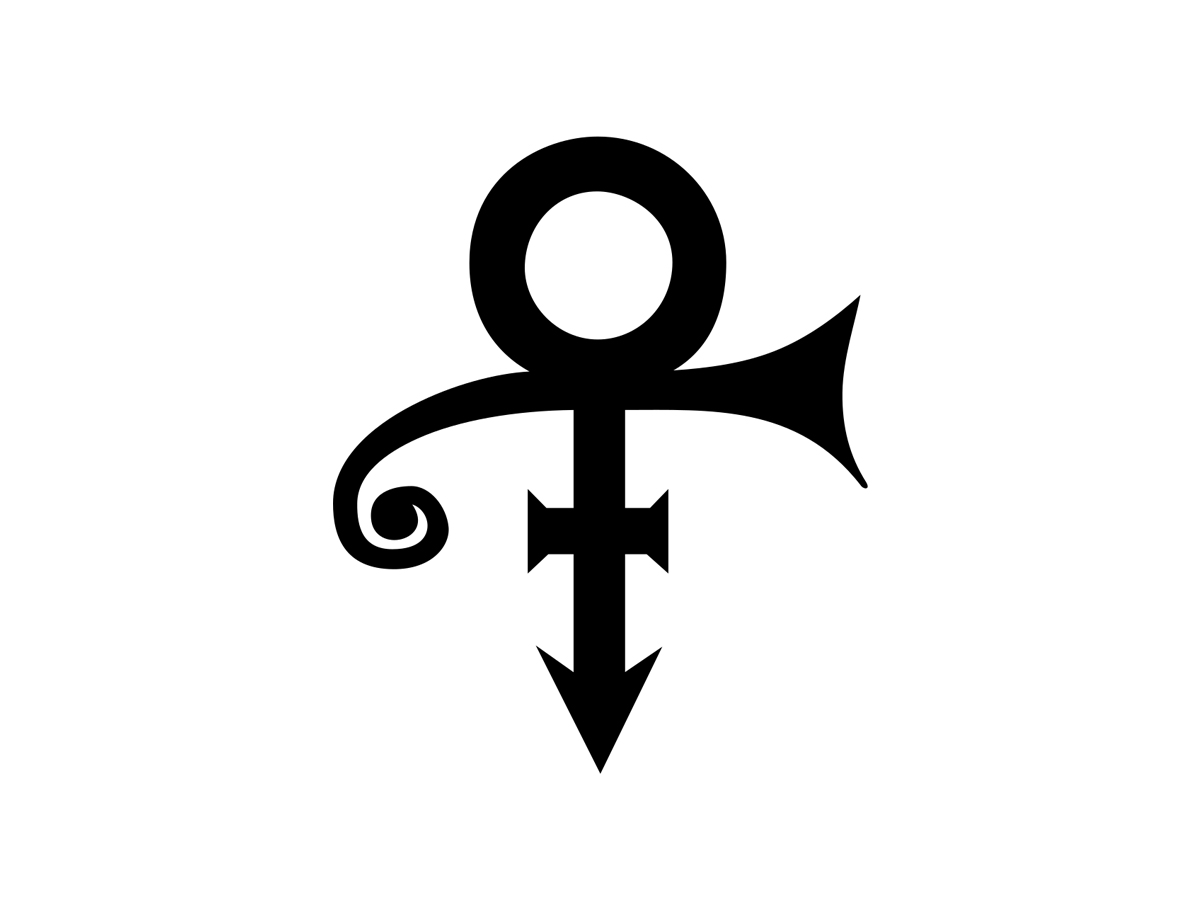 3. Ƭ̵̬̊
And then there is Prince’s unpronounceable hybrid male/female symbol that he introduced in 1993 as his new name. It was invented as part artistic gesture of rebirth and also as a savvy business strategy to try to break out of a contract with Warner Bros. The symbol made a media commotion. Besides creating a linguistic challenge, there was the problem of how to distribute the new icon—in this pre-internet world, media outlets were sent floppy disks with a file containing a font for the glyph. 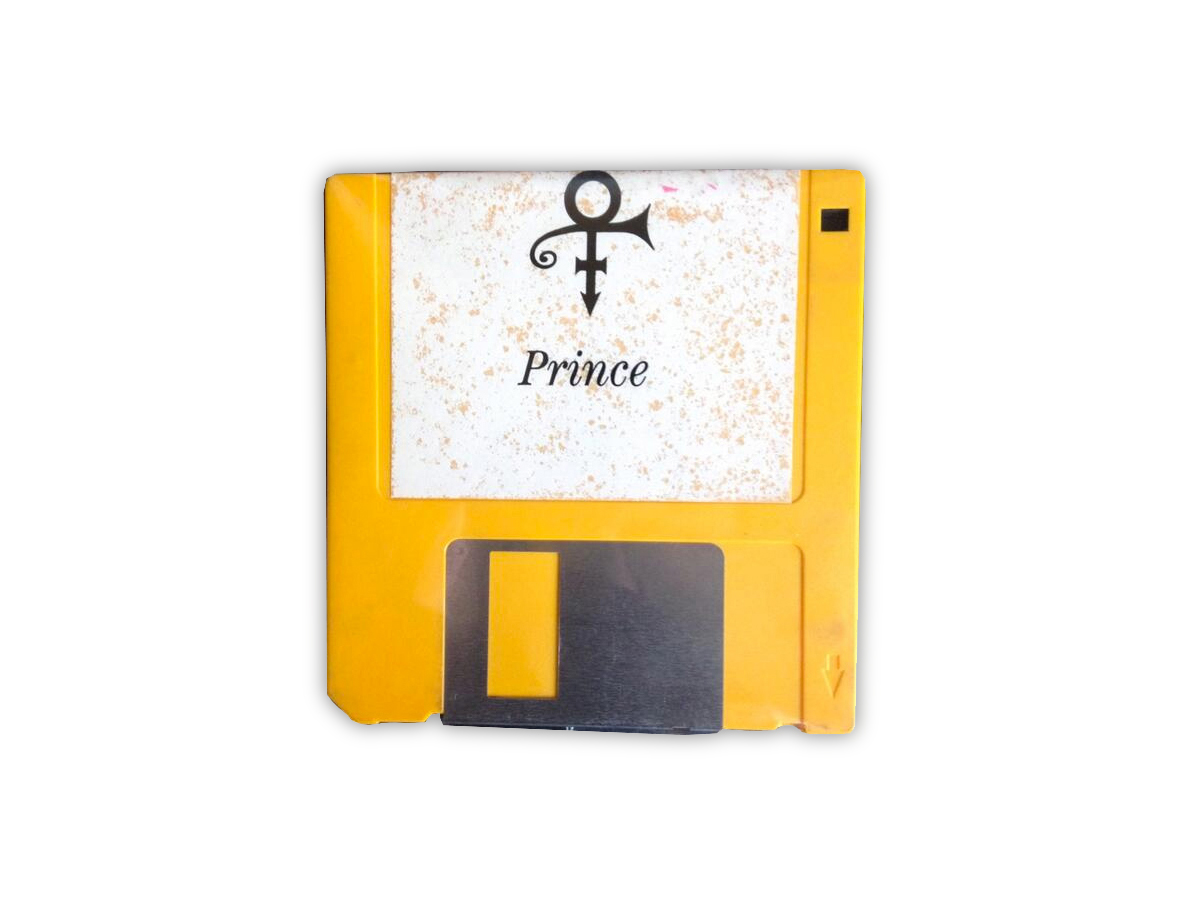 While he may not have been able to get out of the contract, in many ways, the move was greatly successful, promoting The Artist Formerly Known as Prince’s reputation as a gender-bending avant-garde performer. The symbol itself came to be called the Love Symbol. 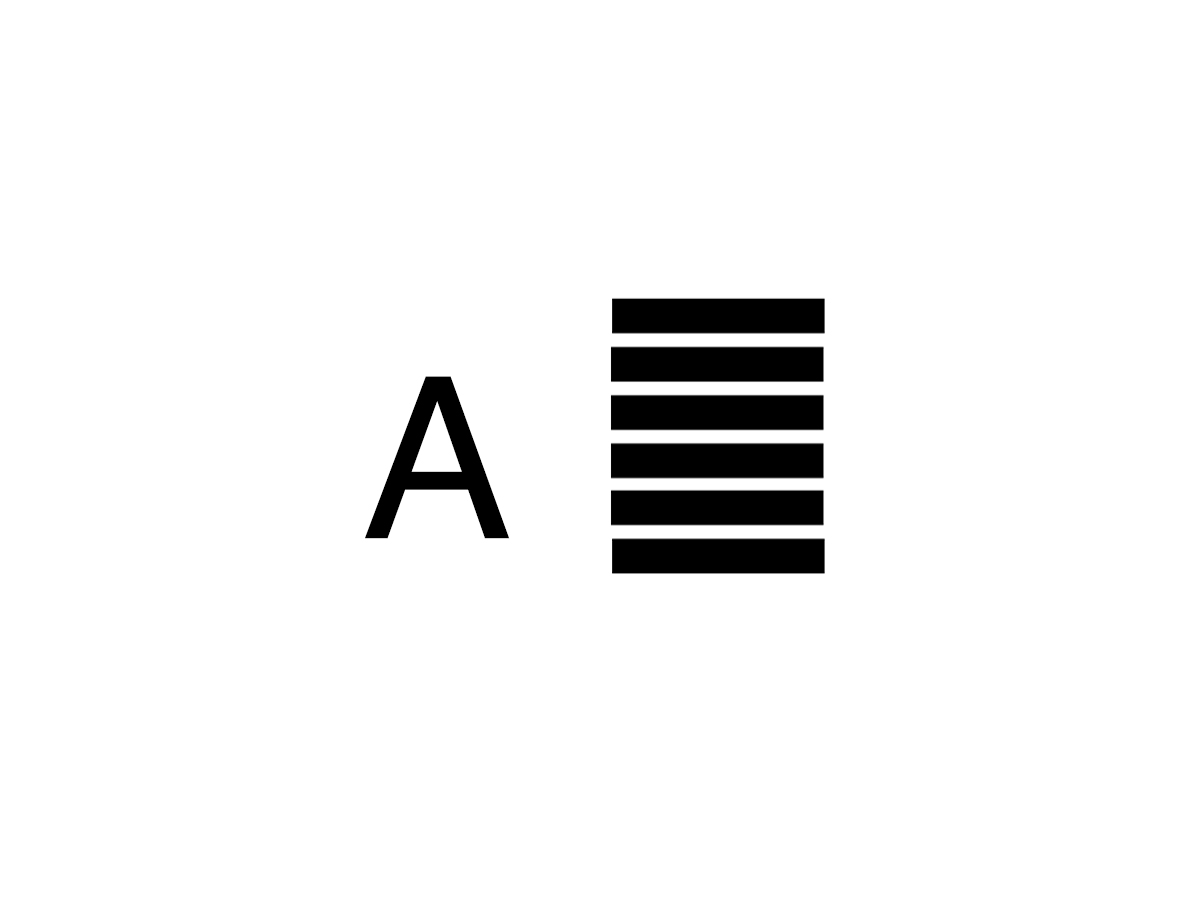 4. The Apple Glitch
My final example is actually an Apple iOS error. This past fall, I, along with millions of other OS10 and 11 apple users in the world, experienced a bug on our phones where when I typed “I” it was auto replaced by the letter “A” and an unpronounceable unicode character. The bug was related to Apple’s cloud-based synchronisation for predictive text—a relatively recent feature that allows users’ dictionaries to be shared using its iCloud service. When the phone learns a novel autocorrection, such as the name of a new contact, it will be shared with other devices owned by the same person. So for some reason, our phones decided that “A #” was better than “I.” 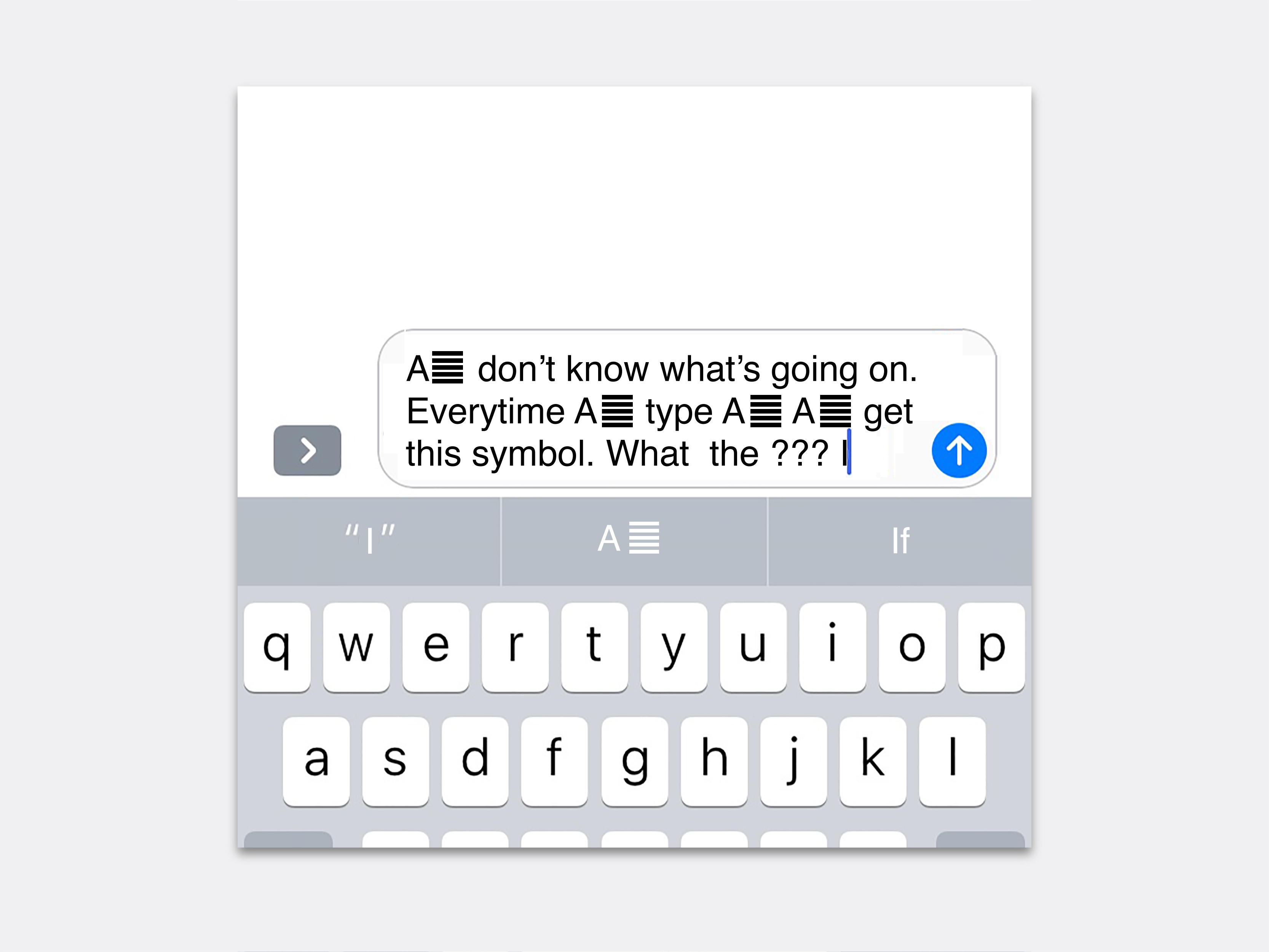 Semiotically, i doesn’t have to look like i for people to understand what you mean. The key in this case was ensuring that enough people using and recognizing the new symbol gave it the same meaning as “I”. As the hundreds of millions of people who use iPhones and experienced the glitch together, it began to enforce a new letter in the alphabet. Once we collectively decided we didn’t need i, we adapted and moved on. Our machines dictated a new language for us, and we ran with it.

So if you add up the four examples my project seems obvious: design a gender-neutral pronoun glyph, hack into Apple, and insert a program so that every time someone writes he or she the program autocorrects to the symbol. Easy.

For the purposes of the project, I stuck to the first step.

I started by drawing possibilities for the form. Introducing a gender-neutral pronoun is tricky territory. In the most simple case it replaces the awkward  phrasing “he or she,” the written “s/he,” and the often grammatically incorrect “they.” 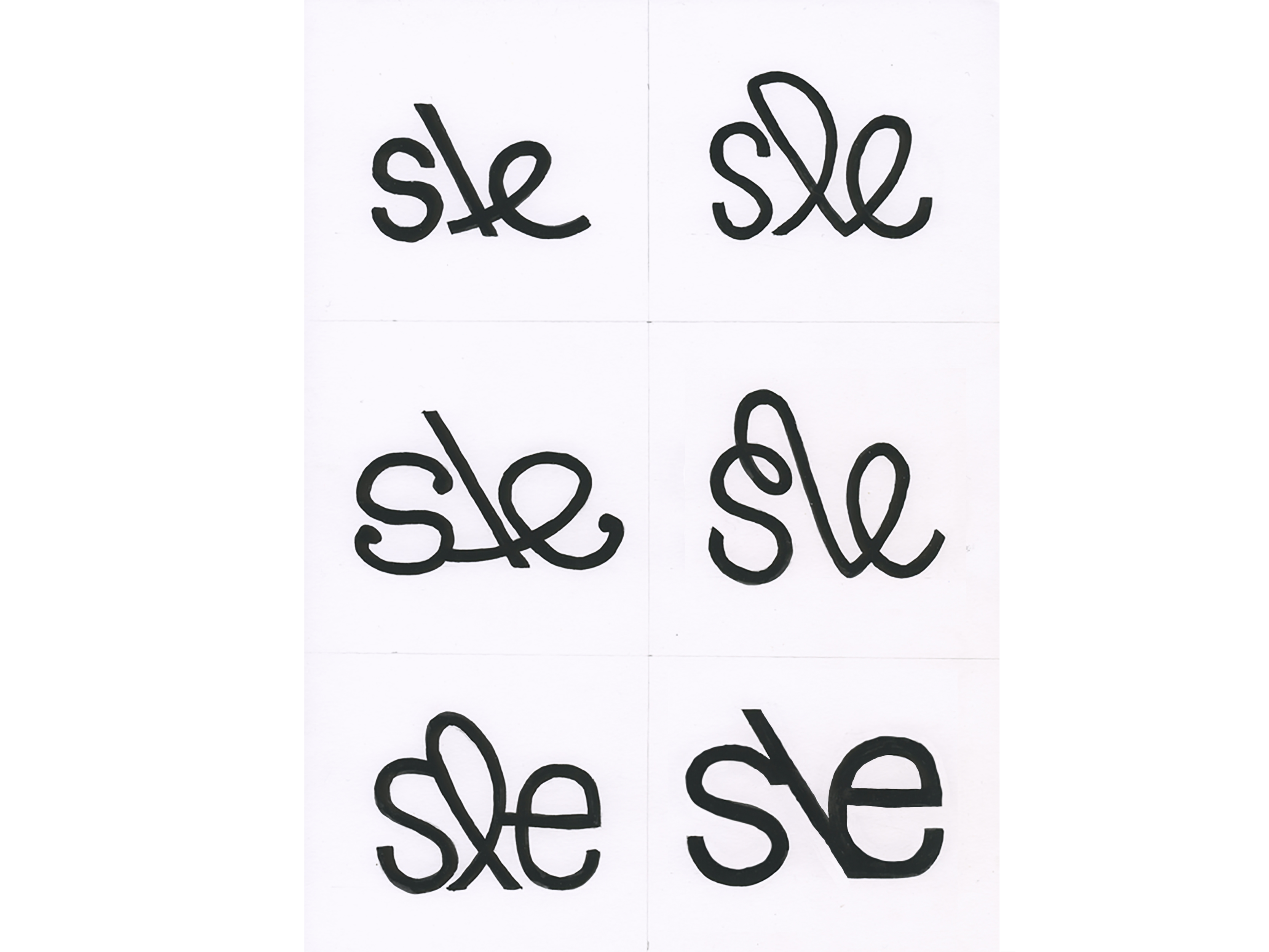 I thought that if the form is somewhat legible as a combination of “s/he” or “he/she” it would be more familiar and easier for people to adopt, similar to the e/t ligature in the ampersand. The evocative nature of blending two letters also seems appropriate to the task. Like the ampersand too, I thought it should be something that flows from handwriting. 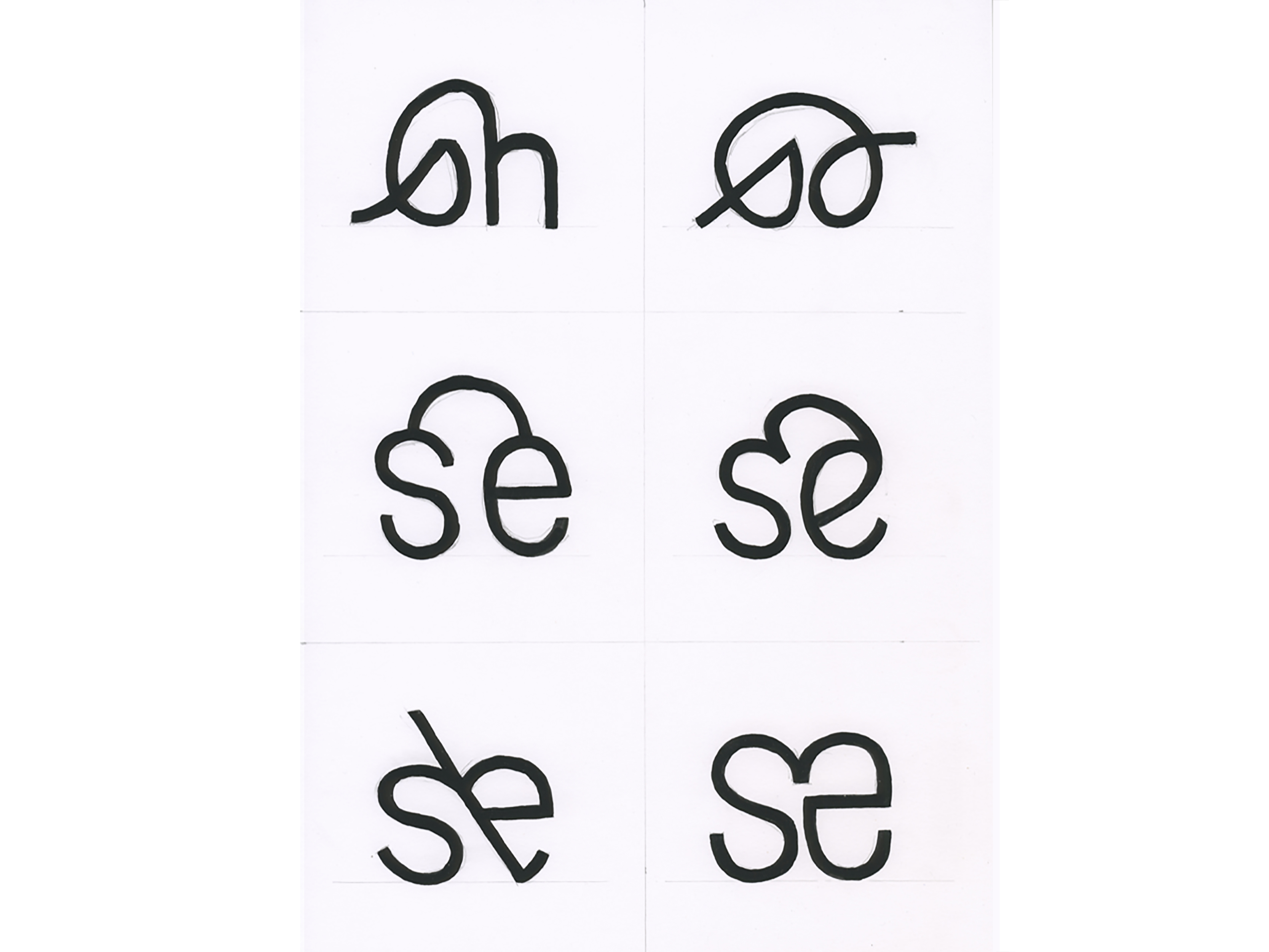 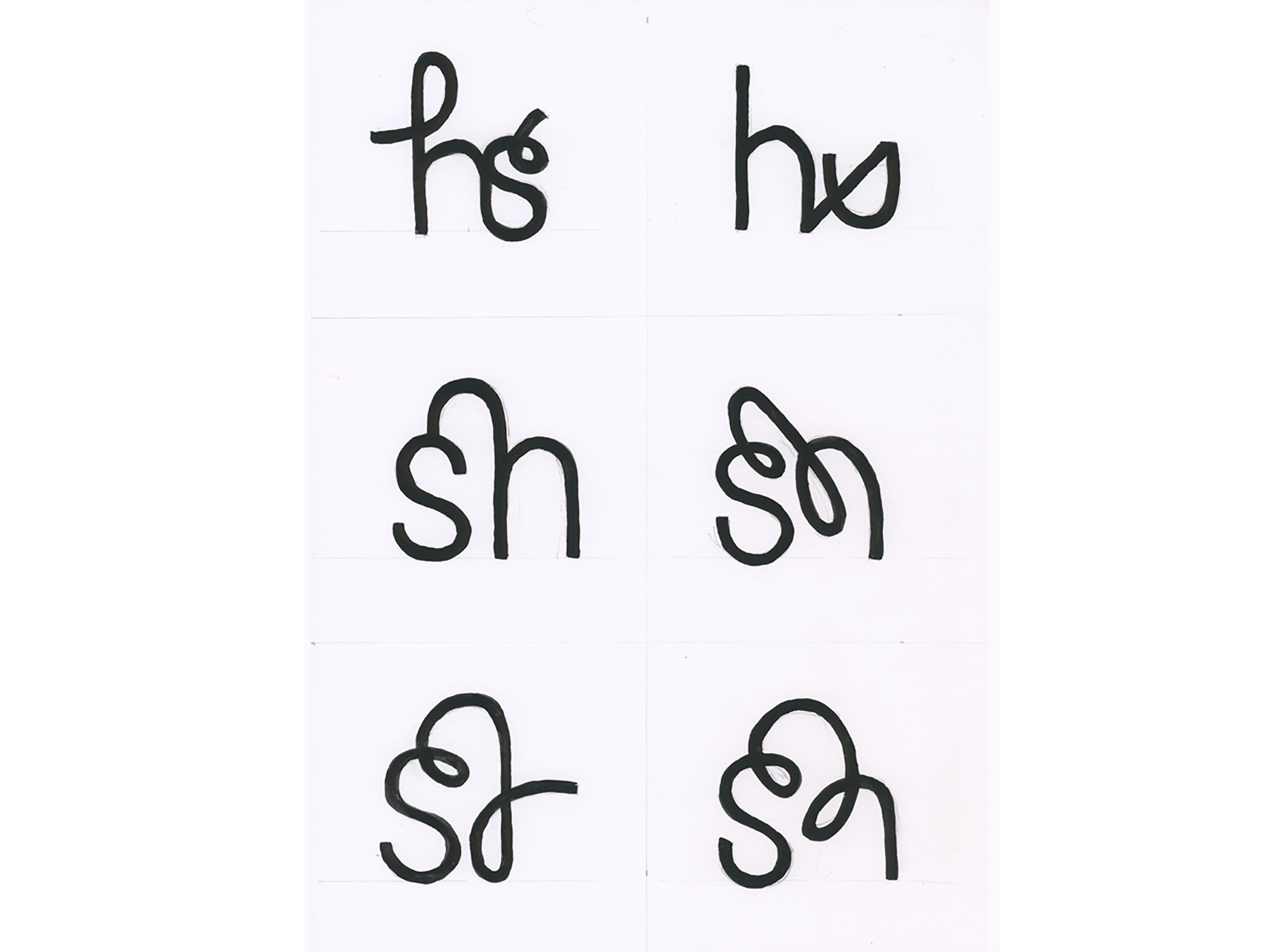 I’m not sure, however, using the honorific Ms. as a model, I’m not proposing a pronunciation for it, hypothetically thinking that pronunciation would develop organically over time, allowing different communities to determine their own word for it. Hopefully coalescing into a universally accepted term. 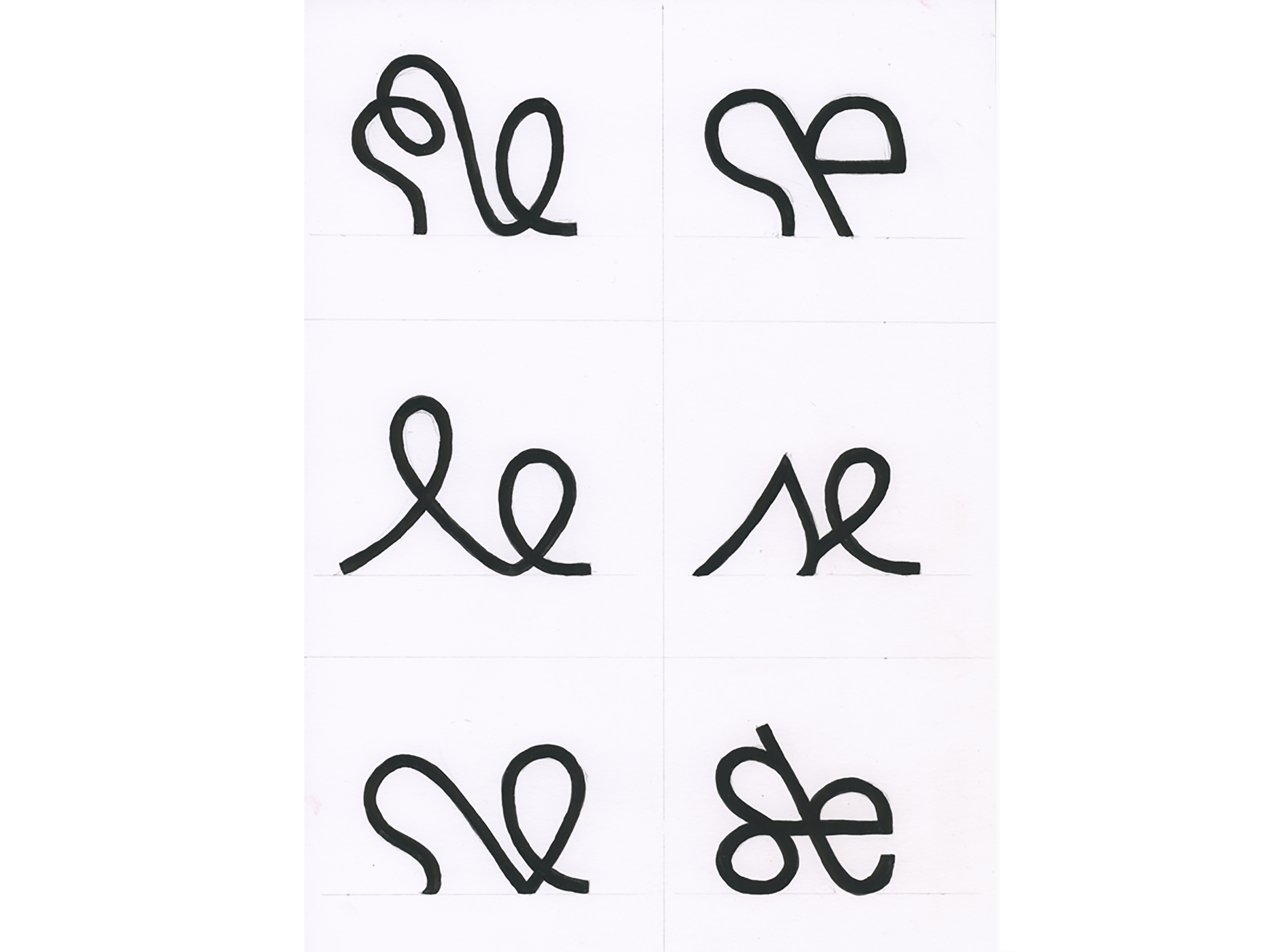 I further worked on the shape of the glyph so that along with he and she, possible genderfluid pronoun options like Ne, Ve, E, Ze, or They to name a few, could be seen as equally evident in the form. 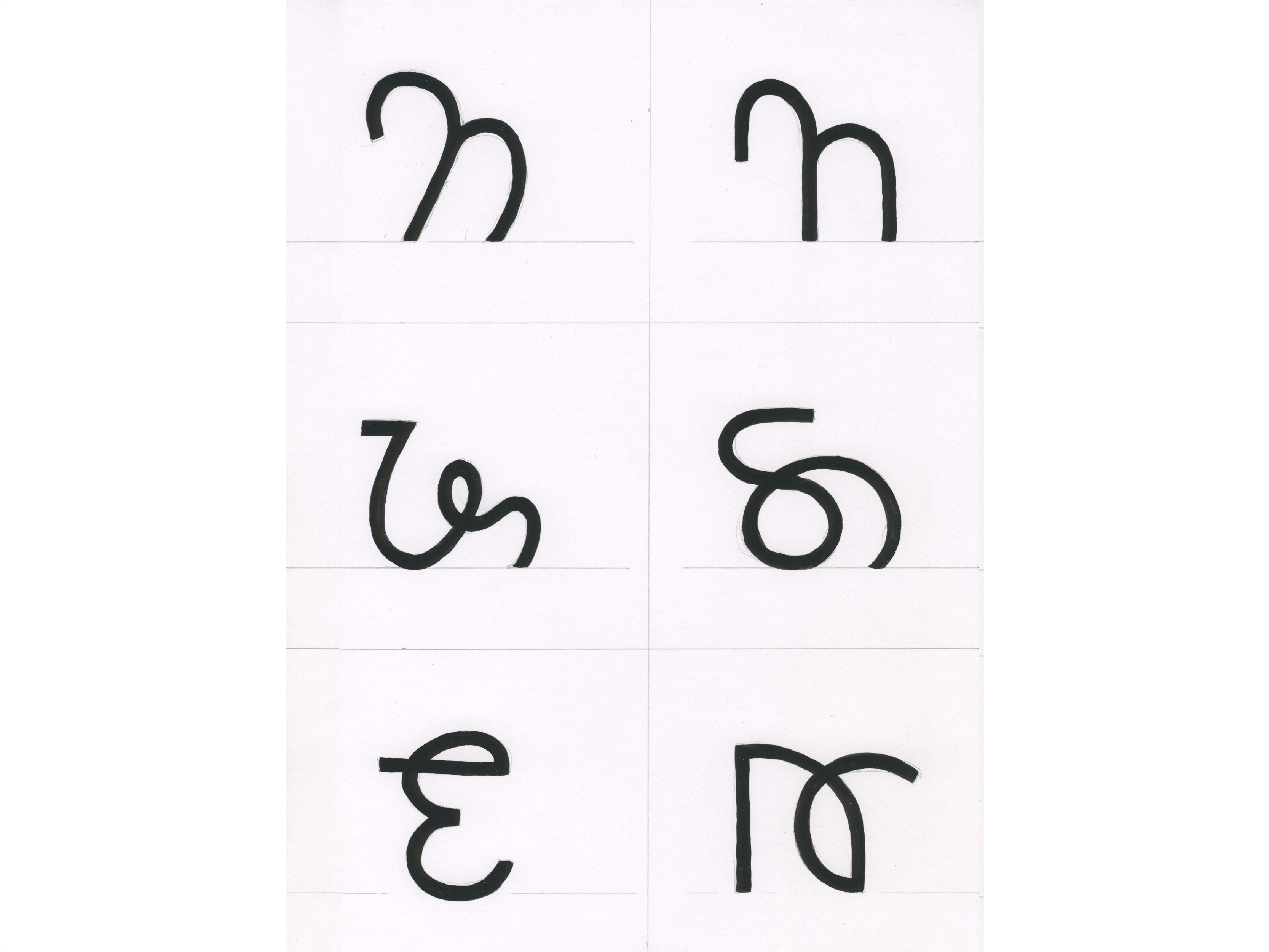 Thinking of Prince’s lovesymbol as a model, perhaps the form could represent a full range of gender possibilities beyond just gender neutral. 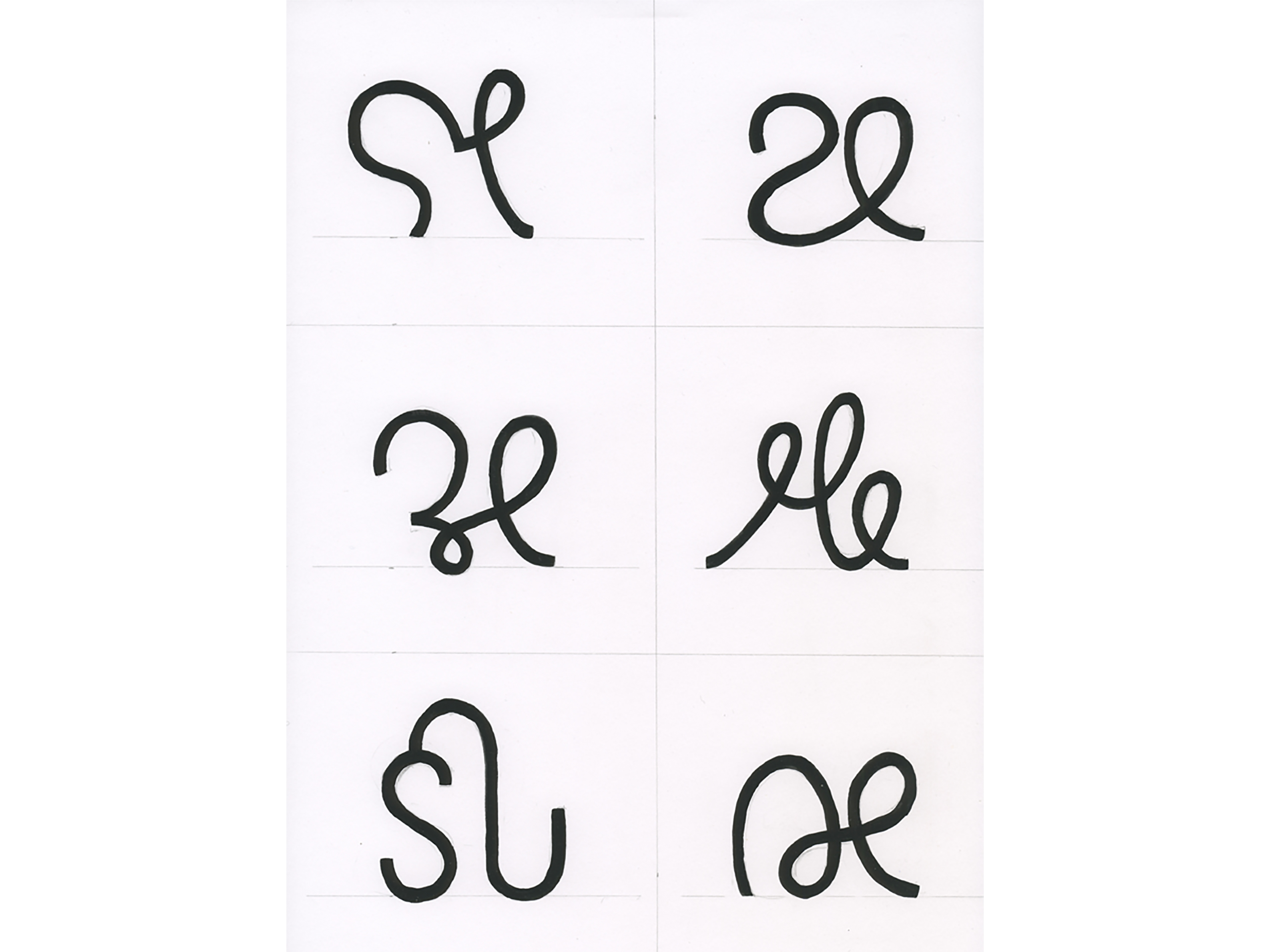 The next step is to choose one of the glyphs, program it into the next iOS update so that as you type he or she the symbol automatically replaces the words. 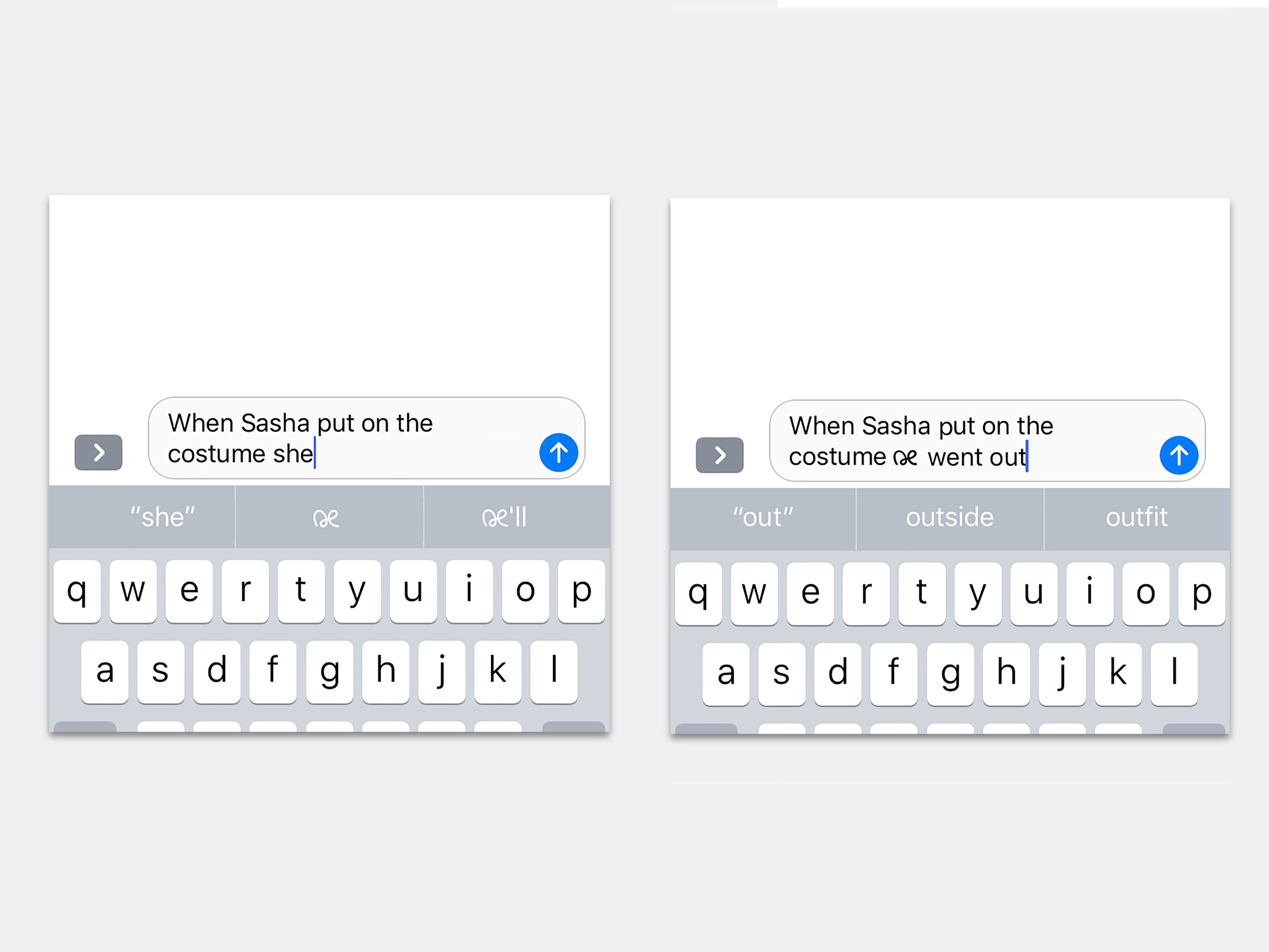 Unlike the glitch this fall, I’m wondering if you should be able to override it, or if the symbol replaces she and he completely. Thus forcing English to become a more gender-neutral language like Finnish (to name one) where the word hän means both he and she. 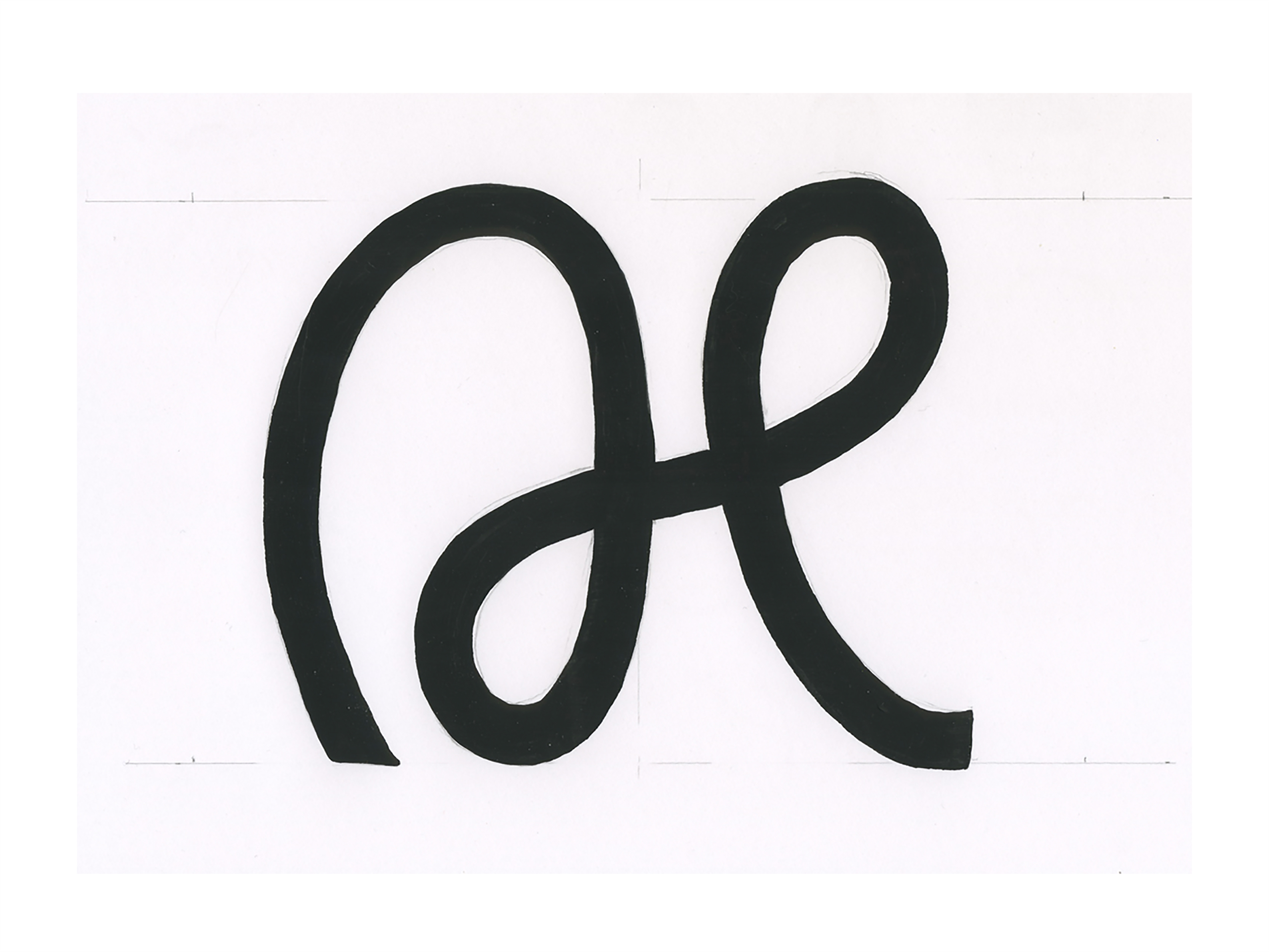 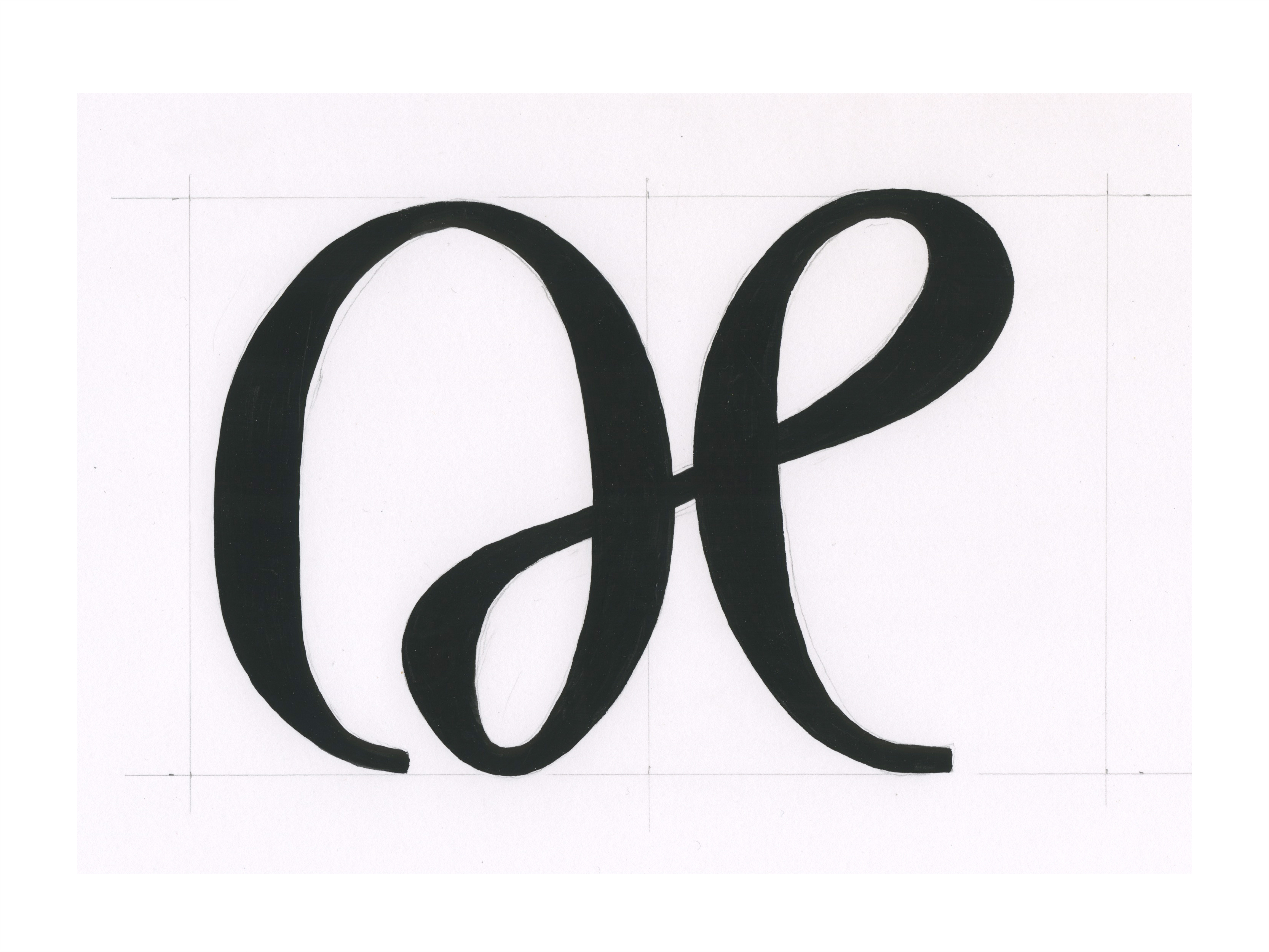 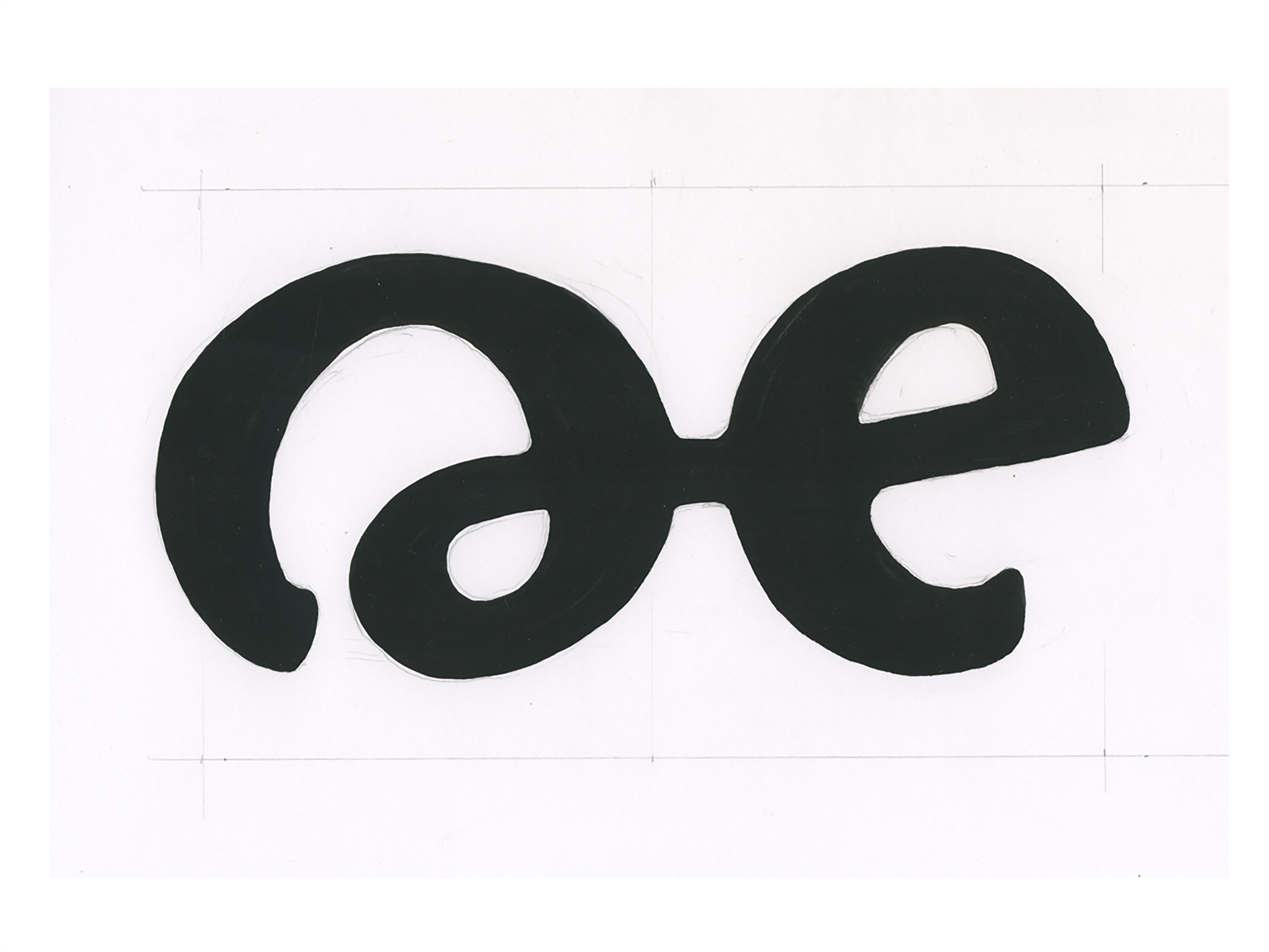 Perhaps with this combination of tech and typography where form can preceded spoken language, and where programs can override our conventions, or change depending on context or connectivity, we someday can achieve something that can be both universal and unique